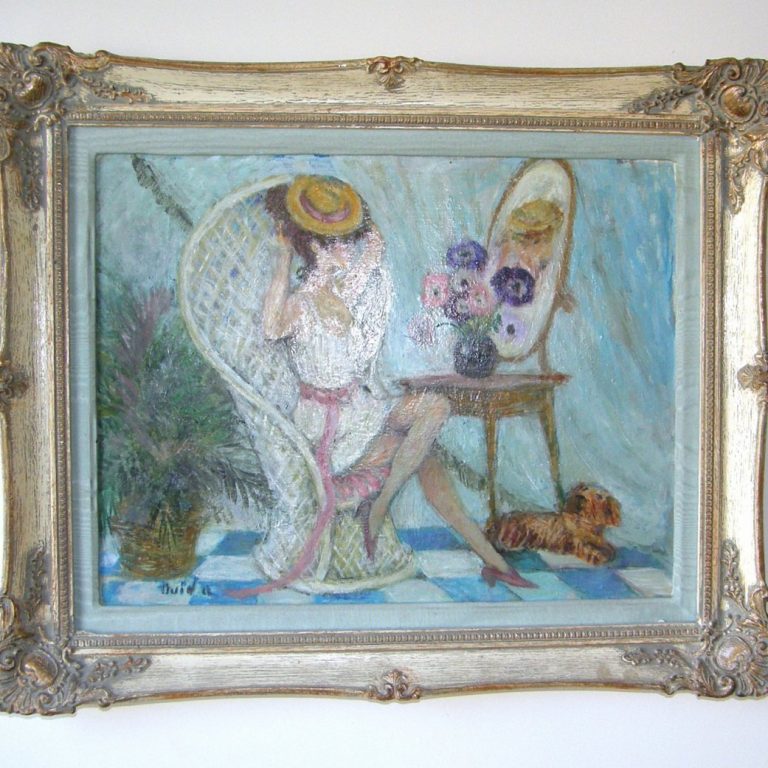 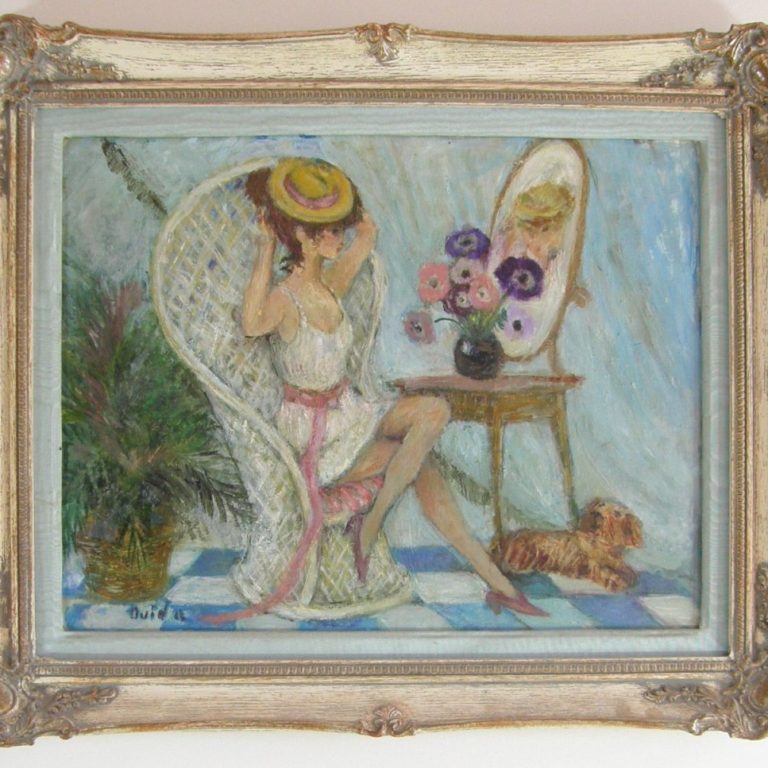 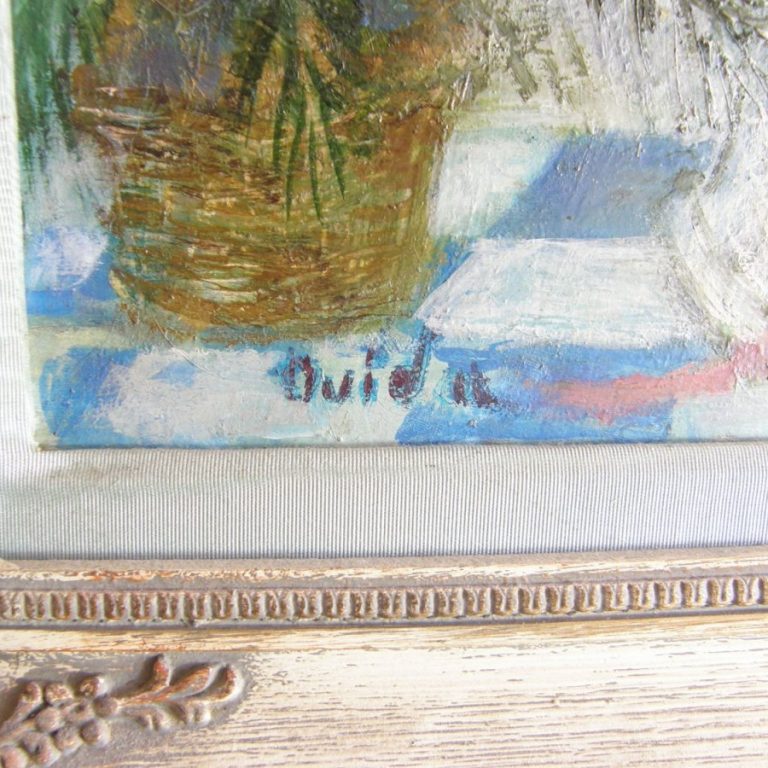 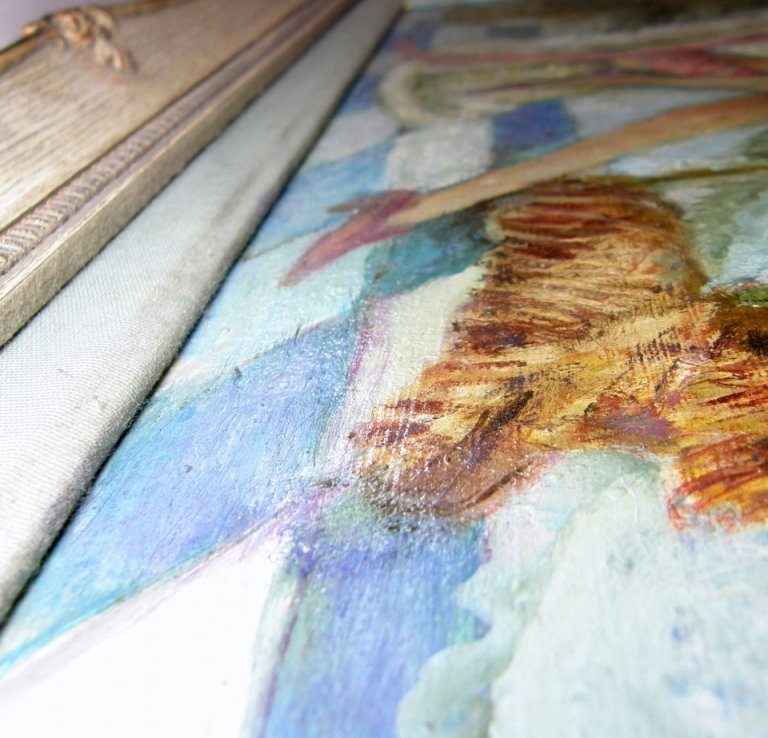 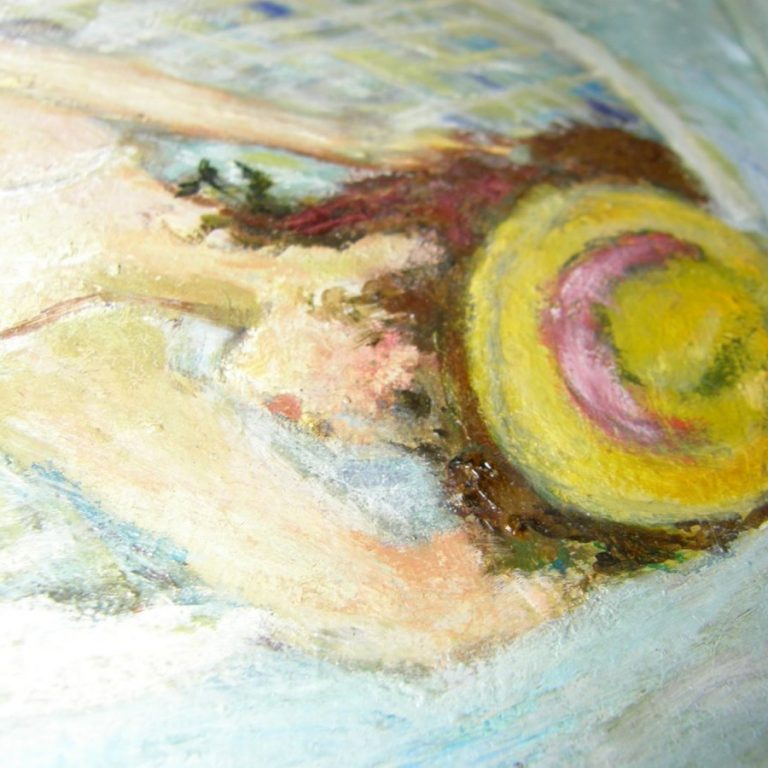 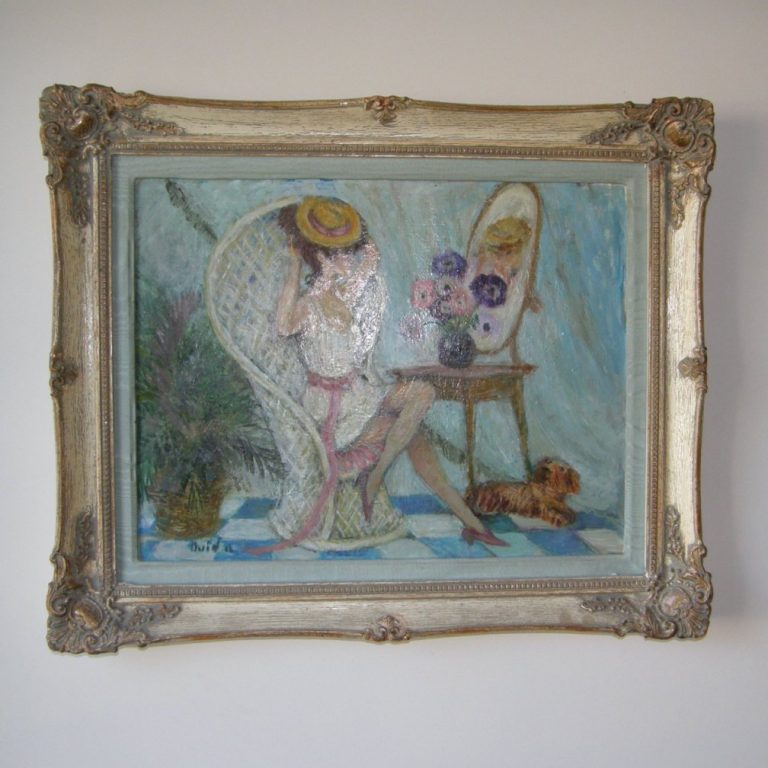 ARTIST: Ouida Romanoff George was a resident of Palm Beach, Florida. She’s known as a portrait painter of the rich and famous.

Ouida George: A Retrospective Jan 3, 2009 A pioneer of the early Palm Beach art scene, Ouida George is a widely recognized American painter and long-established Palm Beach resident artist. She began exhibiting at the Worth Avenue Gallery (the only gallery on Worth Avenue at that time) in 1950 and maintained her position as an integral part of the Palm Beach art scene, completing more than 40 paintings and drawings a year and offering a new one-woman show every two years from 1956 until her last one woman show in 1994. She moved to Palm Beach Galleries in 1958, under the direction of George Vigouroux, Jr. In 1973 she moved to the James Hunt Barker Galleries, where she was also the art consultant for the gallery and remained for over twenty years. Ms. George started her career as a sculptor, and attended the Art Institute of Chicago. She studied with both Ann Norton and Jose de Creeft and at the famous “Escuela La Esmeralda,” in Mexico City. By 1949 her intense love of color and light prompted her to concentrate all her energy on her painting. She was encouraged by friends in the art world including, Russian surrealist painter Pavel Tchelitchew, American artist and legendary art dealer Betty Parsons, and Palm Beach pioneer and art patron Alice De Lamar. She contributed drawings and designed covers for many Palm Beach charities and has illustrated two books. Her many collectors include the Duke and Duchess of Windsor, Mr. & Mrs. Cornelius Vanderbilt Whitney, Mrs. Alexander Speyer, Mrs. E. F. Hutton, Mrs. Barbara Whitney Headley, Mrs. Robert Kennedy, Tallulah Bankhead, Mrs. Jean MacAuslad, Mrs. John Pillsbury, Mr. and Mrs. Dimick Reese, Mr. & Mrs. Llwyd Ecclestone, Sr., Mrs. Rose Sachs, Mrs. Jean Van Waveren, Mrs. Beverly Dolan, Mrs. David Williams, and Mrs. Benjamin Javitz. She has painted the portraits of Palm Beach children and been commissioned years later to paint them again as adults. Ms. George has received enormous recognition in galleries across the US. and has exhibited at a gallery in Dallas since 1959. She completes about six private commissions a year for patrons around the country, and she still advises a few students at her studio in West Palm Beach.” RE: Worthpoint.

Following is the obituary of the artist from the Palm Beach Daily News:
“Artist Ouida George of Palm Beach Gardens died Sunday, June 8, 2014. She had her art shown in many island galleries and had a show of her work at The Society of the Four Arts. Born in 1916 in Chicago, Mrs. George started her career as a sculptor, attending the Art Institute of Chicago. She studied with artists Ann Norton and Jose de Creeft, and at the “Escuela La Esmeralda” in Mexico City. She exhibited from 1950 through 1994 and her paintings can be found in private collections throughout the United States, Canada, Europe and Asia. In 2009, The Society of the Four Arts in Palm Beach honored her with a retrospective show of her work. More than 60 years ago, George signed with the only gallery in Palm Beach — Alice DeLamar’s Worth Avenue Gallery, according to a 2009 Palm Beach Daily News story. In 1958, George transferred to Palm Beach Galleries, which was owned by a group of society mavens including Mary Sanford.
In 1973, George followed the gallery’s assistant director, James Hunt Barker, when he opened a gallery of his own in Palm Beach. She showed at Barker’s gallery and served as his art consultant for more than 20 years, setting up exhibitions and receptions. Victor Hammer saw her work here and signed her for his gallery in New York, where she exhibited until Hammer’s death in 1985. From the mid-1950s to 1994, George created about 40 paintings and drawings a year and presented a one-woman show every two years. Her ink drawings became almost as popular as her paintings and were used to decorate invitations to some of Palm Beach’s most prestigious galas. Her portraits of children were especially popular. Among the families whose members George painted were those of Llwyd Ecclestone, Dimick Reese and Robert Kennedy. She also created a series portraying clients in their bathtubs, including one of Palm Beacher Rose Sachs. She also bred purebred English springer spaniels for the show ring. She is survived by a daughter, Edyne Gordon of Santa Fe, N.M.; and a niece, Sherry G. Dubois of Lake Worth.” Submitted to AskArt by Mark C. Grove