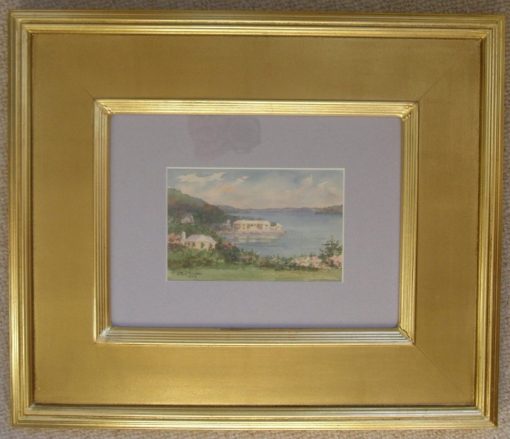 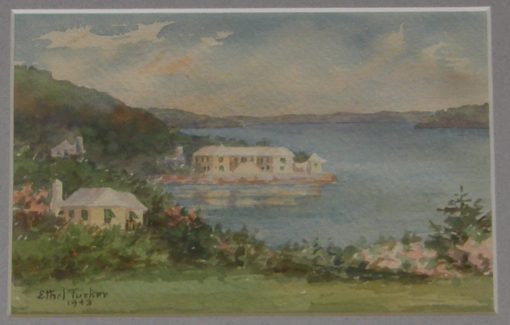 =SOLD= 0329:: Painting: Ethel Tucker 1943 (Bermuda:1874-1962). Watercolor. Realistically depicts the estate known as ‘Spithead’ in Bermuda. It was an eighteenth century house owned by Eugene O’Neil and saw traffic by the likes of Mark Twain and Rudyard Kipling amongst others.

The Tucker sisters, Catherine (Kate) and Ethel, were born in Bermuda towards the end of the 19th Century and spent most of their lives there as painters and shop owners. However, they were in New York City, where they received formal art training at the New York School of Applied Art. Their mother, Leonora Tucker, had art talent, and it is written that the girls inherited her talent. Their father was George Somers Tucker, a Speaker of the Bermuda House of Assembly and Alderman for the city of Hamilton, Bermuda, and in 1933, Catherine Tucker bequeathed a large sum of money in memory of her father to the Corporation of Hamilton to build a new City Hall. From Bermuda, Ethel Tucker was the first to go to New York, and when she returned home for a visit, her younger sister, Kate, decided to go back with her, and they remained in the city for eleven years. To earn money, the first two years while attending the School of Applied Art, they made Cotillion favors in the evening. In 1910, they opened The Little Green Door Tea Garden at Barr’s Bay on the waterfront, and it remained in business for 29 years, attracting many visitors including Mark Twain, Rudyard Kipling and Eugene O’Neill. In 1911, they opened a Little Green Door shop in Hamilton, Bermuda, and from there sold their paintings, which led to so much popularity that they responded positively to suggestions of having the images placed on postcards, Christmas cards, playing cards, scarves, brass bells, embroidered linens and notepapers. Further expansion of their shops was in Lake Muskoka, Ontario in 1915; Lake Placid, New York in 1916; and St. Augustine, Florida in 1917. In 1928, they opened the first antiques shop in Bermuda. Both women were noted for brightly colored floral landscapes, waterscapes and botanical images, with most of them being scenes of Bermuda but some being English subjects such as landscapes of Kent. Their earliest paintings, pre-World War I, were printed on postcards in Germany. After the War, they selected J. Salmon printing company of Kent, England, and this association remained for the remainder of the lives of the women. Over 100 postcard images have been found, and watercolor originals are in the collection of Queen Elizabeth, having been obtained by her uncle, the Duke of Windsor, who bought 20 paintings from the Tucker women when he visited Bermuda.

In 1958, the sisters closed their shops and went into semi-retirement. And the market for their type of painting dissolved as modernist art styles became much more popular than the sweet, somewhat sentimental realism of the Tucker artwork. The Bermuda National Gallery has watercolor paintings by the Ethel and Catherine Tucker, and the artworks are roughly 7 X 10 inches in size.”