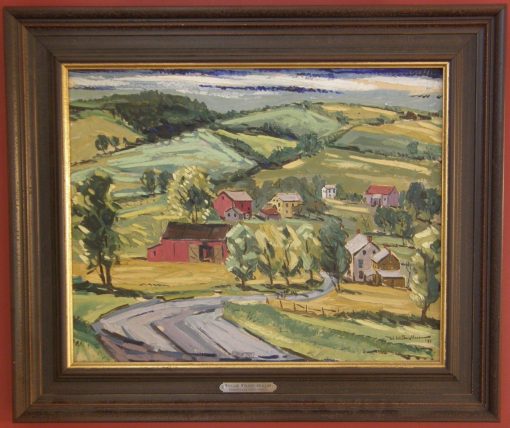 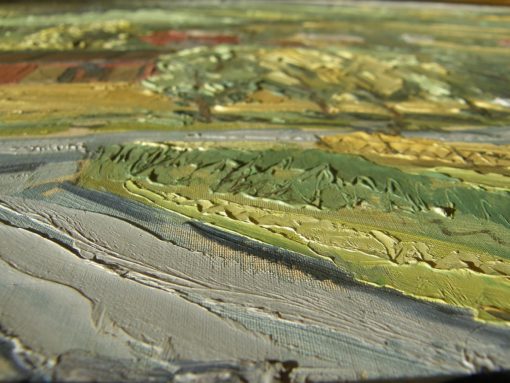 Artist’s Bio AskArt: “Ceramics Giant Remembered Kemerer Devotes Show To William Swallow
Myra Yellin Outwater, (A free-lance story for The Morning Call) May 12, 1996.
…………………………………………………………………..
Allentown artist Richard Peter Hoffman still remembers the day 50 years ago when his good friend, William Swallow, won two first prizes at the National Sculpture Society’s 11th Annual Ceramic Competition at the Syracuse Museum of Fine Arts. Swallow received the $500 IBM prize for The Way of Red Clay,”depicting an Amish boy with a horse and colt, and the $100 National Sculpture Society’s Award for Cow With Silver Horns. “Bill was at Parkland High School teaching, and when I heard the news I was filled with tears and could hardly speak. I was so excited that I was crying when I called him with the news,” recalled Hoffman, who was one of Swallow’s closest friends for more than 25 years. Teaching obligations — and a lifelong shyness — prevented Swallow from going to Syracuse to accept the prizes in person. The next year, when the Metropolitan Museum of Art in New York City bought and exhibited The Way of Red Clay, Swallow didn’t go to that show either. “He couldn’t leave his art classes,” said Hoffman, who went in his place. On Tuesday, the Kemerer Museum of Decorative Arts in Bethlehem will honor Swallow with the first major show of his work in more than 30 years. His last area show was in 1961, when 28 of his ceramic sculptures were shown at the Allentown Art Museum just a few months before he died. “Swallow was a ceramics giant,” said Rudy Ackerman, director of Allentown’s Baum School of Art and chairman of Moravian College’s art department. “Swallow always heard a different drummer than did Walter Baum and the other artists of his day. He believed that his art should reflect his heritage and he created some of the most poignant and honest portraits of the Pennsylvania Dutch farmer and his family.” “In the 1940s, one of the local critics said of Bill’s work, `He will be either one of the area’s greatest teachers or greatest artists, but he can’t be both,’ ” said Hoffman. “In the end, Bill could never decide which he wanted to be, a great teacher or a great artist.” William Weldon Swallow was born Sept. 30, 1912, in Clark’s Green, a suburb of Scranton. He died of a stroke on May 26, 1962, at the age of 49, while teaching at Parkland High School. When Swallow died, he was eulogized by both artists and the thousands of art students he influenced in his years as director of the art department at Parkland. Swallow, who lived with his widowed mother in a farmhouse at the corner of Cedar Crest Boulevard and Walbert Avenue, Allentown, created one of the finest ceramic arts facilities in the area at Parkland. It was there that he created the works that won him national acceptance as one of the country’s outstanding ceramic artists. Today, Swallow’s work can be found in the Metropolitan Museum of Art, the Everson Museum of Fine Arts in Syracuse, N.Y., the International Business Machines collection and the Scranton Museum of Art. Throughout his short career Swallow exhibited at the Pennsylvania Academy, the Philadelphia Museum, the Montreal Museum, the Carnegie Museum, the Associated American Artists Gallery, and museums in Dallas, Los Angeles County, San Francisco, Chicago, Boston, San Diego, Baltimore, Denver, Detroit, Washington, D.C., and Minneapolis. “Swallow is an example of a local artist who gained national renown while continuing to live modestly and work in the Lehigh Valley,” said Boris Wainio, guest curator of the show. “We wanted to show the variety of his work.” Wainio worked hard to gather together the ceramic sculptures, oil paintings, watercolors, mobiles and mosaics on display at the Kemerer. Hoffman best remembers his friend’s zest for creation. “He made his own Christmas cards,” said Hoffman, who loaned his collection of Swallow cards to the museum. “He was always trying new things. I remember one day Bill started to work on abstract paintings with strings. Then he started to work on unusual sculptures of heads. Calvin Klein bought one. I drew that head in a painting that I did of Bill’s house and studio. Bill made me the art deco mask that is in the show.” There is a joyous whimsy in the many small ceramic pieces displayed at the Kemerer, but sadly many have been broken and repaired. “The tragedy is that so many were lost or not taken care of,” said Wainio. “Many were pieces that he gave to his students and were used around the house. One of the tragedies associated with Swallow’s work is that so many of them have been lost and we don’t know where they are.” Wainio borrowed some of the large imposing ceramic family groups in the show from the Allentown Art Museum, the Swain School and the Parkland School District. Because Wainio is convinced that a lot of Swallows are still around, he has decided to take a different approach to the show, which he calls “flexible curating.” Submitted to AskArt by Mark C. Grove